Finland was the first European country to give women the right to vote in 1906 and since then a significant amount of women artists became usual. 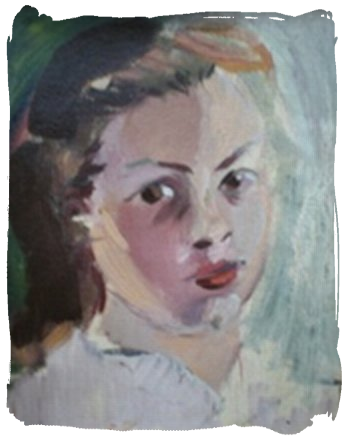 Irina Bäcksbacka (1919-2002), daughter of gallery owner and art dealer Leonard Bäcksbacka, made her early oil and pastel paintings during summer vacations together with her parents in Sääksmäki where they were hosted by the Finnish artists Mikko y Kalle Carlstedt (in the center of Finland). This location was popular among artists due to its marvellous landscapes. Besides these mentioned artists, other known painters like Tyko Sallinen, Gösta Diehl or Marcus Collin spent there also a lot of time.. Irina admired in particular the latter, which can clearly be seen in her early works.

In the autumn 1915 Leonard Bäcksbacka fundó Taidesalonki/Konstsalongen en Helsinki, an art gallery attended not only by both Finnish, Swedish or French artists, but also by intellectuals, writers and people belonging to the theater . The cultural environment, together with her artistic gifts and her fathers encouragement contributed to her decision to become an artist; when 13 years old she arranged her first exhibition in Taidesalonki .

Three years later 16 years old she arranged an exhibition with Bellman motives, which was exhibited the following year at Galerie Fahlcrantz in Stockholm. The Finnish industrialist -Gösta Serlachius- bought most of her Bellman-paintings, and entrusted her to paint Bellman-frescoes in the wine cellar where the Gösta Serlachius Museum is now located, in Mänttä (near Tampere).

In 1936 Irina visited Spain together with her parents. After her visits to several Spanish museums what most deeply impressed her were the paintings of El Greco. After that trip she arranged the same year in Helsinki an exhibition of her Spanish paintings. Thereafter she spent a study period in Paris (1937-38). There she was hosted by the Finnish painters Yngve and Märta Bäck, and she also frequently visited the studios of Adrien Holy y Jules Cavailles . By that time she, got acquainted with painters belonging to Peintres de la realité poetique such as Brianchon, Planson or Caillard. In Paris she also met other Finnish artists as the wellknown writer and drawer Tove Jansson and the painter Birger Carlstedt. The results of her study period in Paris were soon exposed in Helsinki in 1939. As the Finnish Winter War raged, in 1940, she organized together with other artists an exhibition at the gallery Modern Konst in Stockholm. The exhibition was aimed to raise funds for the Finnish war invalids (War Invalids Fund), why Irina was awarded the Order of the White Rose of Finland.

After her marriage in 1940 with Ph.D, Manuel Maestro, Irina moved to Madrid where she soon got in touch with so known artists as, Gutiérrez Solana, Vazquez-Diaz, Zubiaurre brothers and sculptor Fernandez Miranda. She spent a long period at the Painters Residence, then located in the Alhambra in Granada, and from there she visited also different picturesque Andalusian locations such as Cadiz, Jerez and Arcos de la Frontera. Most of her pastels and oil paintings representing Andalusian lanscapes, portraits and flamenco dancing scenes belong to this time period.

In 1942, Irina arranged inHelsinki an exhibition of Spanish motives , and in 1944 she participated in a group exhibition "Bodegones Españoles" (Spanish Stilleben) at the Museum of Contemporary Art in Madrid, and two years later with the group De Unga (Los jóvenes) in Stockholm. All along the 1950 she held regular exhibitions in Helsinki and in other cities in Finland. Spanish and Finnish landscapes and portraits furnished most of these exhibitions of pastel and oil paintings.